Welcome to the home of sports and games

The following is an abridged version of the official FIDE handbook for chess.

Article 1: The nature and objectives of the game of chess

1.1 The game of chess is played between two opponents who move their pieces alternately on a square board called a `chessboard`. The player with the white pieces commences the game. A player is said to `have the move`, when his opponent`s move has been made.

1.3 It is not allowed to capture the King

Article 2: The initial position of the pieces on the chessboard

Icons made by Freepik from www.flaticon.com is licensed by CC 3.0 BY

2.3 The initial position of each piece on the chessboard are as follows: 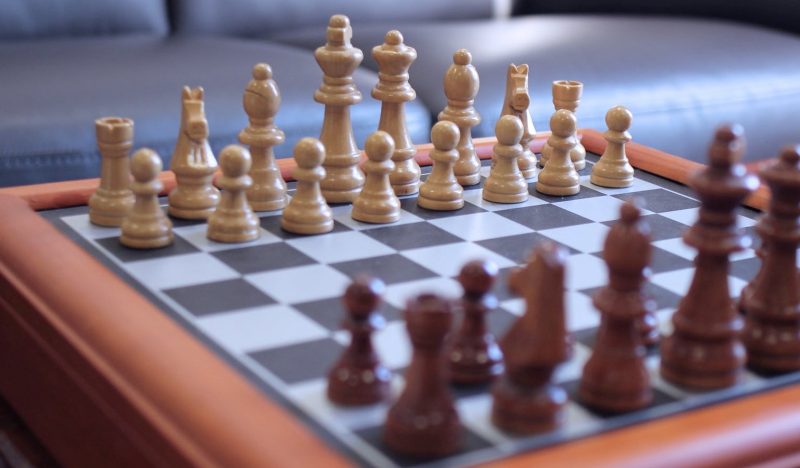 Article 3: The moves of the pieces

3.1 It is not permitted to move a piece to a square occupied by a piece of the same colour. If a piece moves to a square occupied by an opponent`s piece the latter is captured and removed from the chessboard as part of the same move. A piece attacks a square if it can capture an opponent’s piece on that square even if this piece cannot itself move
A piece is considered to attack a square, even if such a piece is constrained from moving to that square because it would then leave or place the king of its own colour under attack.

3.2 The bishop may move to any square along a diagonal on which it stands.
moves bishop

3.3 The rook may move to any square along the file or the rank on which it stands.
moves rook

3.4 The queen may move to any square along the file, the rank or a diagonal on which it stands.
moves queen

3.5 When making these moves the bishop, rook or queen may not move over any intervening pieces.
3.6 The knight may move to one of the squares nearest to that on which it stands but not on the same rank, file or diagonal.
knight moves

d.A pawn attacking a square crossed by an opponent`s pawn which has advanced two squares in one move from its original square may capture this opponent`s pawn as though the latter had been moved only one square. This capture is only legal on the move following this advance and is called an `en passant` capture. This move must be made in the event that no other legal move is possible
enpassent

e.When a pawn reaches the rank furthest from its starting position it must be exchanged as part of the same move for a new queen, rook, bishop or knight of the same colour. The player`s choice is not restricted to pieces that have been captured previously. This exchange of a pawn for another piece is called `promotion` and the effect of the new piece is immediate.

3.8 There are two different ways of moving the king, by:

The opponent`s pieces are considered to attack a square, even if such pieces cannot themselves move.or

(1) The right for castling has been lost:.

a. if the king has already moved, or

b..with a rook that has already moved

b. if there is any piece between the king and the rook with which castling is to be effected.

c. The king is said to be `check` if it is attacked by one or more of the opponent`s pieces, even if such pieces are constrained from moving to that square because they would then leave or place their own king in check.

3.9 No piece can be moved that will either expose the king of the same colour to check or leave that king in check.a

The Act of Moving the pieces

Article 4: The act of moving the pieces

a. one or more of his own pieces, he must move the first piece touched that can be moved, or
b. one or more of his opponent`s pieces, he must capture the first piece touched, which can be captured, or
c. one piece of each colour, he must capture the opponent`s piece with his piece or, if this is illegal, move or capture the first piece touched which can be moved or captured. If it is unclear, whether the player`s own piece or his opponent`s was touched first, the player`s own piece shall be considered to have been touched before his opponent`s.
d. If a player touched more than one piece simultaneously without a note for J`adoube, , and it wasn’t known what piece he touched first, then he must move one of these touched pieces. I.e. he is given the choice to choose which of them he wants to move.
4.4

a. If a player deliberately touches his king and rook he must castle on that side if it is legal to do so.
b. If a player deliberately touches a rook and then his king he is not allowed to castle on that side on that move and the situation shall be governed by Article 4.3(a).
c. If a player, intending to castle, touches the king or king and rook at the same time, but castling on that side is illegal, the player must make another legal move with his king which may include castling on the other side. If the king has no legal move, the player is free to make any legal move.
d.If a player promotes a pawn, the choice of the piece is finalised, when the piece has touched the square of promotion.

4.5 If none of the pieces touched can be moved or captured, the player may make any legal move.
4.6 A player forfeits his right to a claim against his opponent`s violation of Article 4.3 or 4.4, once he deliberately touches a piece.
4.7.1. When, as a legal move or part of a legal move, a piece has been released on a square, it cannot then be moved to another square. The move is considered to have been made when all the relevant requirements of Article 3 have been fulfilled.

Article 5: The completion of the game

You can get more detailed rules from the fide website